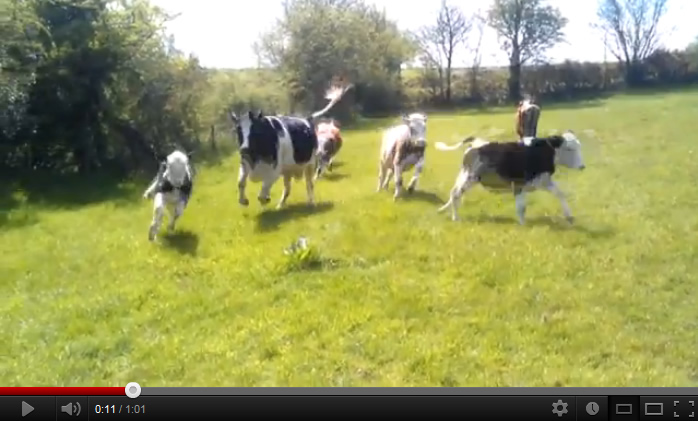 The Ahimsa Dairy Foundation, which sells entirely slaughter-free milk, is celebrating its first birthday this week and to mark the event has released a video of its sanctuary in Wales. Click here for video

Looking Back – the Journey of Ahimsa Milk

A Story of a Remarkable Dairy
All great journeys begin not just with the first step, but with a great vision too. This is the story so far of our journey to realise the vision of Ahimsa slaughter-free milk.

The Beginning: 2007
• Nicola Pazdzierska of the Equality and Human Rights Commission was working for the Lotus Trust, a social welfare charity based at Bhaktivedanta Manor. This is a rural Hare Krishna community where cow protection is practiced at its highest, most ethical standards.

• She was inspired to extend this exemplary cow welfare programme to the wider community.

• Together with Lotus Trust Director Sanjay Tanna, they realised that the real story of how milk is produced commercially wasn’t being told. This germinated into the idea of creating a milk revolution, setting out to provide a totally ethical product – slaughter-free milk – to the general public.

The First Step
• The campaign began under The Lotus Trust as the “Happy Healthy Cows” campaign, promoting the need for cruelty-free milk.

• For two years, the team worked hard to attend many public events and the campaign began to strike a chord with the public.

• During these early years, we encouraged people to take the first step to true compassion and go organic, even petitioning major supermarkets to stock only organic milk.

• Moral support came from author and environmental campaigner Ranchor Prime. He encouraged us to go beyond cruelty-free and work instead for entirely slaughter-free milk.

• A key contact – Patrick Holden, the then Director of the Soil Association, spread the word among the farming community.
• While this was a promising start, the mission to work with a suitable farm foundered after many frustrating months of discussions and investment of time and effort with various potential partners, who either had just a profit motive, or were unable to provide the exact match we required to meet our highest standards.

• Amidst these trying times, a new not-for-profit company called the Ahimsa Dairy Foundation (ADF), was set up in the summer of 2010 to run the initiative. The mission began to take shape once more.

• Finally, after all the challenges and setbacks we faced, the Foundation was formally launched in partnership with an organic Kent farm called Commonwork, and OMSCo (Organic Milk Suppliers Cooperative), on May 6th 2011. The first milk production started in August of that year.

The Struggle Continues
• We cannot compete against the cheaper supermarket prices and have to constantly educate customers as to why our milk is more expensive than that on supermarket shelves. Unlike conventional milk, no cow or bull is ever killed in the name of Ahimsa milk, and after a lifetime of service our cows retire to sanctuaries.

• After constant hiccups with a milk delivery service we decided to do our own deliveries and are now about to buy our own van.

• We are now able to get the milk to our customers within 24 hours of the processing and bottling functions – a major achievement for Ahimsa milk.
Adding Value
• We currently produce clarified butter – ghee – and are planning to add to the Ahimsa product range shortly with cheese, yoghurts and even milk soap.

Where We Are Today
• At the end of our first year we now have quality organic and slaughter-free milk being delivered around London and parts of Hertfordshire. But there is still so much more to do to fully realise our vision.

JOIN US ON THE JOURNEY – BECOME A FRIEND
The Ahimsa Dairy Foundation’s story has only just begun, but it is already a remarkable one, which will go from strength to strength with your support.

Please help us by becoming an Ahimsa Friend, to raise awareness, to educate and campaign for slaughter-free milk and better care of cows.

By working together we can make slaughter-free milk a reality across the UK.

Wow, just discovered you! Are you for real? If so, it is fantastic! I truly believe every animal we use for anything deserves to keep its life, humane treatment, and a happy retirement. We clearly owe them this at the least.
Im sorry I live so far away in California. I would love to visit. The best I can do here is be vegan and promote our farm animal sanctuaries (we are near Animal Place in Grass Valley and Farm Sanctuary in Orland).
Ahimsa 🙂

This is wonderful. I hope to see your products and efforts flourish. Bright blessings’
china x

For years I have questioned the whole idea of having to slaughter the offspring of dairy cows in order to produce milk. Surely there must be a better way. I am so pleased you have made this a reality, so,what if the milk is more expensive, we don’t need to drink gallons of the stuff, just enough. Good luck, hope you go from strength to strength.