An Unforgettable Day – by Iain Ashfield – Posted in: Cow Talk

Monday 17th May 2021 is an unforgettable day for all of us connected to Ahimsa cows for many reasons. Some good, some, not so good.

It’s the day the cows left behind all that they were familiar with and ventured into the unknown. It’s the day we left Manton for a new start at Chater Valley and Grange Farm.

I’m sure both myself and Vraja could write a book on the trials and tribulations of that day, but I would like to focus on one particular time, that for me, overshadows everything else we experienced. It was the time that Dahlia showed her true colours, and they were beautiful.

It was getting towards the end of a long and arduous day, all that remained for me to do was milk Dahlia (our Swedish Red Darlia) and Rolly (our Brown Swiss Roll) and get everyone settled down for the night. Simple enough, one might think. No, we’re dealing with cows here.

A number of things are against us in fulfilling this task,

The list goes on, and on. The only things I had on my side were that I had made the milking stand similar to how it was at Manton, I had their familiar feed buckets from Manton and finally, and the most important thing, Trust.

So, I brought them all down to the paddock closest to the barn and gently separated off Dahlia and Rolly into the small area at the end of the barn to bring them in. I could see Dahlia was the more confident of the two so I focused on leading her in first, and that way Rolly could just observe what was happening and hopefully build her confidence.

With a combination of encouragement from behind, enticing with the feed bucket from the front and patience and persistence, Dahlia got to a position where she could see the milking stand and finally understood what was happening. She walked in and we settled down to the familiar practice of milking. Once finished, I let her out and she spent some time sniffing around, getting used to the place.

Rolly, on the other hand, was well and truly stuck. There is a join between two separate areas of the concrete floor that she had an issue with. She was frantically sniffing it, then backing away. No matter how much encouragement or enticement I offered, she would not cross it. This went on for a very, very long time and tested my patience to the limit. In desperation, I was praying for guidance as to how on earth I was going to get her in to be milked.

Then it struck me, I could use Dahlia to help me. She’s been in, there wasn’t a problem and she’s come back out so it’s more than likely she’ll do it again.

I went to get Dahlia and asked for her help to get Rolly in. I turned her round and headed her back into the barn. As she came up behind Rolly she gave her a gentle nudge on the backside with her head and walked round in front. I then tried to herd the two of them round, hoping that Rolly would follow close behind Dahlia but as soon as she got to the join in the floor, same again, she backed away.

I continue to try and encourage her with Dahlia in front but to no avail. Rolly will not cross no matter what.

It’s getting late now; it’s been a long day and my frustration is beginning to push out. Somehow or other my patience wins the battle and I decide to try again. As I walk towards Dahlia, she turns and walks back past Rolly. Once past, she turns around again and gently nudges her backside like before. This time though when she walks past, she stops alongside and Rolly puts her head down towards her udder, just like a frightened calf does with its mum. They stand like this for a short time then I ask Dahlia to move on a bit, she takes a couple of steps forward and remarkably Rolly goes with her. I ask Dahlia to move up a bit more and they both go.

She has crossed the line!

So, we carried on like this until Rolly could see the milking stand, Dahlia stepped away, and Rolly rushed in.

I was amazed, the hairs on my arms were standing on end and I was so thankful to Dahlia. She understood the situation, she knew exactly what was needed and like the true matriarch that she is, she helped Rolly in a way that only another cow can do.

It’s one of the most beautiful things that I have ever had the privilege of witnessing and is forever etched into my stone-cold heart. 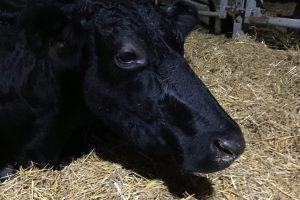 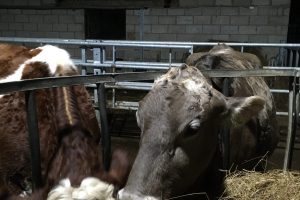