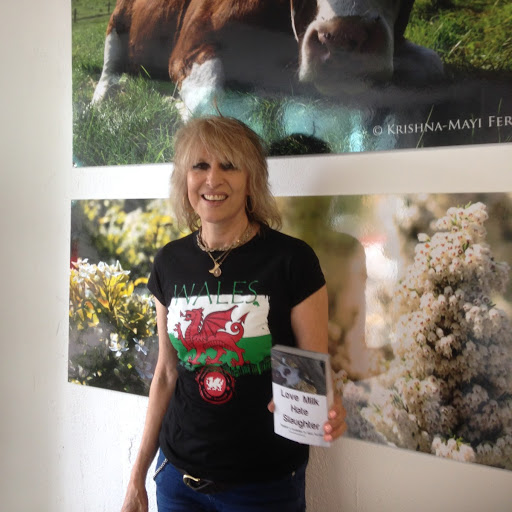 A special thank you to Chrisse Hynde for her help throughout the year, particularly with her support for the ahimsa manifesto. 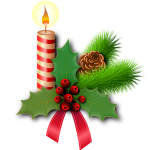 Well here we are at the end of 2017 and what a year it has been. Mostly highs, the few inevitable lows, but throughout your support has been humbling, heart-warming and fabulous. We have some ideas for our friends, members and sponsors next year and more of that shortly.

The highlight of the year was finally exchanging contracts on own new, organic land nestled between the beautiful villages of Wing and Manton in Rutland. The difference this has made to us and the future security of our cows is incalculable. We now have a firm base on which to build our mission – making slaughter-free dairy a reality across the UK and beyond.

Many of you have already visited us and we hope to see you again in 2018. We also hope to see those who haven’t yet had a chance to come and see the cows and explore our rolling hills. We are already planning several open days, but want to do some special programmes for our members and sponsors. As Christmas is upon us you will have your mind on other things, but please watch this space in the New Year as more will be revealed then.

Another high was the addition to the Ahimsa family of our Swiss Brown twins Rock and Roll and their daughters Rockstar and Hot Raisins. The mothers fitted in really well with the milking herd several of whom piled in with calf-care. Violet and Jasmine simply adore the calves and love being their aunties.

Various friends have also been bringing us cowbells from trips abroad and now a number of the girls are proudly tinkling away. This has helped enormously bringing them in from the fields when it was going dark.

The non-milkers are doing well. Bimba and Dandelion were sent to join them after the former was plaguing the milking cows with her horns. She is now better behaved despite launching an attack on the winter hay bales just for the fun of it. We had to quickly cover the damaged bales with tarpaulin. Dandelion is still a princess.

So the low this year was Network Rail breaking a water main supplying our land. This caused us a real headache and we had to stop production for a month. We have claimed against them and things are back to normal but everything was held up. This means skimmed and semi-skimmed pasteurised milk is still in abeyance along with cheese and other products. We are working on it, but have to ask for your patience for a little longer.

A final high to our year was a carol service with the cows for local villagers. It was a lovely evening, the weather was kind to us and the Rutland Choral Society were magnificent.

So here’s wishing you all a very happy Christmas and a healthy and prosperous New Year. We look forward to seeing you in 2018.

A day in the life of the Ahimsa Farm 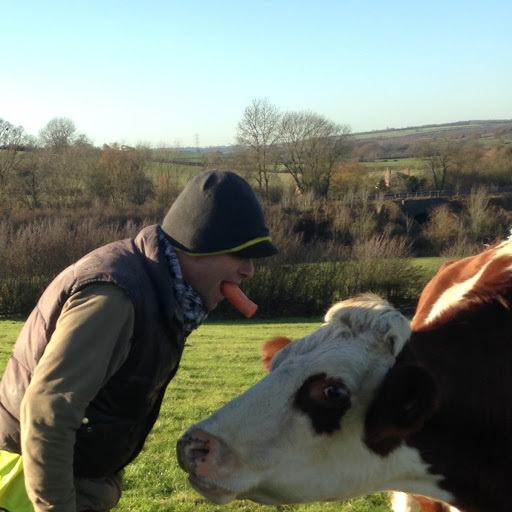 The sun is rising. I hear the cows stirring, their bells dinging; it’s time to feed them. Golden arms of light streak across the sky and I sing a greeting to all the girls. The robin hops by reminding me of his territory, First things first -the girls low at me, breakfast for us. Govin Das and I start pulling the hay apart and tossing it into the girls, all eyes are now on us and there is a small stampede and a few happy kicks.

The hay down and we head around the side and start mucking out. A few wheel barrows later we start bringing in the straw in and making the beds. It’s like having big hamsters, lovey, big, friendly hamsters who give milk and moo.

Cows bedded and fed nowit’s time for last night’s milk. I take it out of the freezer and bring the white gold up to the processing unit where we transfer the milk into the indoor churns. White boots on and white coat. It’s become second nature to do this, before I thought it was such a drag now I don’t even think about it. Milk transferred, back into farm boots. What’s next?

When people ask me what I do I tell them we milk cows but that is only a small fraction of what we do. Fences down, broken pipes, parts of the everyday running of the farm missing, empty, finished, broken or never there. Check email and see what the day holds. Check the mineral licks! Give the carrots the nice man left yesterday forthe cows. “We’re nearly out of sugar!!” Govin Das informs me as he rounds the corner with two mugs of hot tea.” On the list” I blurt “On the list”. We sit down on a damp bale of hay and watch the steam rise off the girls as they munch down on the haylage which today smelt of pineapples. There’s nothing like opening a new bale of haylage the smell can surprise you in a nice way.

The phone rings and a neighbourfrom Wing tells me that Harry the ox has found his way into the other field. How does he do it? I thank her and add it to the list. “Harry’s out again,” I tell Govin Das. “Not again…How?”He replies. God knows I shrug. ”Let’s bring them some carrots”, I say.We load into the truck and head up to the oxen carrot bags ready for distributing, Draupadihas her radar tuned in on carrots and makes a B line for us, she takes most. Kamala gets as many as I can salvage from Draups. Some railway workmen pass by the field we are in and we give them a “nice day for it” smile and wave. They wave back wearily they have been working all night on the tracks. Oxen photographed, combed and carroted. “Sugar” I say “oh yes” replies Govin das and some toothpaste..

Oakham witnessed the two happy cowherd boys staggering through its streets leaving a trail of cow dung and straw in our wake. We chin-wag with the local suppliers as we get the items for the farm. We spin a few stories and get a few tips from local farmers as we chat. 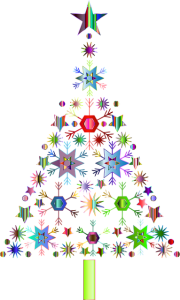 Back to the farm and unload.The sun starts to head for the west fast these days I’mplaying catch-up. A race against the disappearing light until it’s head lamp time. Tomorrow is bottling and pasteurizing day and I have to prepare for that.GovinDas’shomemadesoup is on the boil will be ready in an hour. The list is getting smaller.the phone rings and the list gets a little bigger.

Seagulls coming back screech across the sky homeward bound. Milking time is coming closer. It’s not long now until we are resting our head on the cows sides and we stare into the slowly filling milk bucketfeeling the old familiar muscle cramps but know well that the pain will go in a minute or two. Feeling the chill creeping in and getting closer to the cow.Wondering if Rosiewill be in a better mood than last night? What gets into these girls sometimes I just don’t know!.

Hot milk for us after milking and cleaning and re bedding and feeding. Goodnight ladies see you tomorrow,

“No Rockstar you can’t eat my hat tonight. Thank you”.