A welcome surprise as Tilly produces her third bull calf – Posted in: Uncategorized 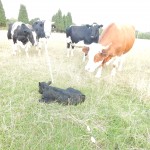 Our Swedish Red/Holstein cow Tilly has just rather unexpectedly given birth to a beautiful little black calf, who we have called Bala – meaning great strength.

We only found out that she was pregnant at around six months and the young bull still arrived a bit earlier than we expected. It took him a while to get the hang of drinking his mother’s milk and we had to show him how to go about it.

That first milk contains colostrum and is vitally important for a young calf as it contains antibodies from his mum’s immune system. The fact he wasn’t eating made him feel all blocked up inside and his dung was rather hard, so we called the vet to check him over.

The vet gave him and injection, but said there was nothing to worry about and by this time Bala had worked out how to drink from his mother. He went from strength to strength and is now running around the field like a little motorcycle.

His older brother is Gautam, the wisest, oldest and gentlest of our bulls. Gautam spent an entire afternoon studying young Bala and wondering what to make of him. His other brother is Seymour, who really couldn’t care less about the new arrival, even though their colouring is exactly the same.

But what a clever girl Tilly is. She has now produced three fine bulls, all of whom will have long and we hope happy lives with us. That is not the fate for most dairy bull-calves who are often destroyed at around three days of age as a by-product of the industry. They might get a few months longer if they are destined for the dinner table and their flesh consumed by humans as veal.

Happily all of our boys will have productive lives as working oxen, helping us to farm our land. Gautam has already started and we think he has really enjoyed himself learning to obey basic commands and pull farm implements such as a harrow.

It is important, just as with people, that bulls are occupied in meaningful work. It builds their muscles and physique and stops them getting bored. There are also many jobs around the farm that are far better suited to bull-power as they are places a tractor could never reach. Nor of course do oxen use fossil fuels, which are wrecking our climate.

So we are happy that we have a new addition to the Ahimsa family and that it is a little black bull called Bala. Maybe in time Seymour will develop some brotherly love.

I am so happy to know Tilly’s offspring will get to lead long and productive lives. What are the chances of 3 boys eh?