Hungarian cows have a Babel fish in their ears – Posted in: Uncategorized 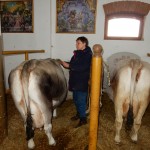 The Ahimsa team has just been on a fact-finding trip to Hungary where we were investigating slaughter-free dairy farming at a Hare Krishna farm two hours from Budapest.

Hungarian agriculture suffered very badly under Soviet Communism and peasant farmers were persecuted relentlessly. Land was confiscated and they were forced to hand over ever-increasing amounts of produce to the state.

Therefore it was inspiring to see a 600-acre farm flourishing in the countryside today.

Their cows are mainly Hungarian Grey, Swiss Brown and Tyrolean Grey and they have a fine herd of milking cows and working oxen together with a gang of young calves. There is also a Zebu bull rescued from a French zoo.

The oxen, some with horns as long as 18 inches, are gainfully employed to do various jobs around the farm – they operate a mill to chop wood for the wood-burning stoves, plough, harrow and reap the hay. They also pull sleighs through the winter snow.

The cows are milked by hand in their stall in the main cow shed. They produce rich, creamy milk, and it is used raw to make a delicious gouda-type cheese.

Part of the daily routine for the calves and cows is to have their stalls cleaned – they are kept indoors during the bitterly cold winter – and then to be brushed.

Firstly, I climbed into the calves’ pen, armed with a variety of brushes, to give the youngsters their turn. Two of the girls started to eat my trousers; one sinking her teeth into my leg, a young bull decided my cardigan was a great thing to chew, whilst the biggest calf, a boy, went for my jacket. After some negotiation I freed myself and set to work, stopping occasionally to sort out the squabbles engendered by one calf thinking another was getting more attention.

Once the calves were all shiny and clean I went to visit the cows. They loved the fuss and attention and stood patiently while I brushed their coats and tails and milk bags.

I had been warned in halting English that one of the cows didn’t have a peaceful nature. I took this to mean she probably kicked and head-butted people, so I missed her out. However, I became aware that she was watching my every move as I walked up and down the shed.

Whichever way I went, this cow turned her head to look at me and mooed. Eventually, I explained the reason why she had not been brushed, but said if she was a good girl I would oblige. Her big black eyes looked at me kindly and I stepped forward to begin making her beautiful.

We got on famously and as I told her that all ladies like to have their hair done, she proffered her fringe to be combed. It was quite clear that Hungarian cows have the Babel fish, made famous by Hitch-hikers Guide to the Galaxy, in their ears and are quite capable of understanding all other languages.

Lovely cows, lovely oxen and lovely people. I hope we will go back soon.