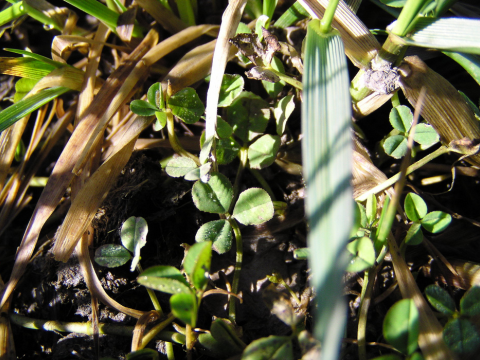 The future is agro-ecology – Posted in: Uncategorized

The way to a sustainable, people-centred agriculture lies in agroecology – farming based on ecological principles, taking account of the interdependence of all living things.

Global grains surpluses are now so great that half of them are fed wastefully to livestock, with an increasing amount turned into biofuels.

In early January, Colin Tudge and Graham Harvey launched the ‘Manifesto for a new agriculture’ at the Oxford Real Farming Conference 2014.

A key theme was ‘agro-ecology’ – farming that takes its lead from nature. It conceives each farm as a mini-ecosystem, and agriculture as a whole as a key player in the global biosphere.

Physiology is a vital science in agroecology – how plants and animals function – and psychology too in the case of livestock, for farm animals are sentient and to keep them without cruelty we need to understand what keeps them content.

Overall, though, we need ecology – often still seen as a woolly pursuit but in truth the most intricate and the most ‘modern’ of all biological sciences.

GMOs are now seen as hyper-modern, and indeed to represent “the future”. But although ‘genetic engineering’ is immensely clever, it too belongs to an earlier conceptual age – a time when scientists assumed that each gene had one specific function and that living creatures could be re-designed to order just by adding and subtracting genes.

Ecologists acknowledge that nature as a whole is non-linear and far too complex to be comprehensively understood. We can reasonably hope only to understand enough of nature to find accommodation with it; to live alongside and within it, with luck to our common benefit.

For centuries peoples around the globe have found their own ways of doing this. Agroecology pursues these same principles.

In practice, if we are to feed everyone well for all time – without wrecking the planet – we need farming that is productive, sustainable, resilient – and regenerative: able to restore fertility and life to land that seems damaged beyond redemption.

We cannot slavishly follow nature, but we can certainly learn its principal lessons. For nature has been productive without interruption for the past 3.8 billion years, while the continents have spun and migrated over the globe and the climate has veered from pole-to-pole ice to pole-to-pole tropics and back again.

Nature is not maximally productive. Natural selection does not favour maximum production from entire ecosystems. It demands survival of individual lineages, and that is quite different.

But – contrary to the mantra of politicians – we don’t need our agriculture to be maximally productive either.

It’s true that today a billion of our present 7 billion are undernourished (according to the UN) and world numbers are on course to reach 9.5 billion by 2050. People worldwide are eating more meat, which by present methods uses a lot of resources.

With such stats in mind Sir John Beddington in his ‘Foresight’ report on The Future of Food and Farming in 2011 [3] said that we would need to produce 50% more food by 2050.

Politicians and industrialists have since have taken this as gospel. Industrial agriculture above all is geared more and more to maximum production.

There is also competition from biofuel (and indeed from cities and golf-courses) so we need to produce more from less land. And so, we’re told, we need “sustainable intensification”, which, it’s assumed, means more high tech.

But other authorities, including Professor Hans Herren of the Millennium Institute, Washington (co-chair of the IAASTD), point out that the world already produces enough macro-nutrient (energy and protein) to support 14 billion people – twice the present population.

Production is not the issue

The UN demographers say that while human numbers continue to rise, the percentage rate of increase is reducing and will be down to zero by 2050. The population will stabilise, then start to fall. So 9.5 billion is as many as we will ever have to provide for.

We already produce 50% more food than will be needed. People go hungry because the wrong foods are grown in the wrong places by the wrong methods. And about half of what is produced is subsequently wasted.

Production is not the issue. The powers-that-be are demanding more because it’ll generate profits, mostly for large corporations. Global grains surpluses are now so great that half of them are fed wastefully to livestock, with an increasing amount turned into biofuels.

Not more, but better

We recognise that farms in general need to be more fertile than most wild land in order to raise output – at least of the things we like to eat. But the plea for 50% more is pure hype, commercial and political.

The real task is to grow as much as we do now (or perhaps less) but to a higher standard, more humanely, and with less damage to the wider environment. We need farming that is more sustainable and resilient, and here nature clearly has much to teach us.