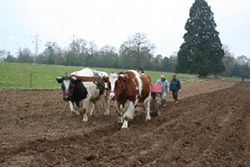 Working with oxen calls to humanities’ ancient roots, but could also provide hope for a green future – Posted in: Uncategorized

As a by-product of the conventional dairy industry more than 100,000 male calves are killed in Britain every year soon after birth. Others are eaten as veal or fattened up to end up on the dinner plate as artery-thickening sirloin steak.

What a breath-taking waste and insult to the bounty of Mother Nature. Oxen have played a key role in agriculture since humans first became sedentary farmers, some 10,000 years ago.

Whilst cows gave milk, which Neolithic people turned into cheese, giving them an abundant source of protein without the need for slaughter, the bull was used to work the land.

Great civilisations have flourished on the labour of the ox, a castrated bull. Oxen pulling ploughs are shown on the walls of many tombs in ancient Egypt and early agriculture owed everything to their toils.

They were used in Britain from at least Roman times, if not earlier, until the mid- C19 when heavy horses and then the tractor took over. However, they had many advantages over the horse, needing a less expensive diet and able to pull enormous loads.

So much of the English language reflects the rich heritage of the ox. The word furlong derives from the Anglo-Saxon word for the long furrow of land within an acre. It was the distance a team of oxen could go without resting. An acre was the amount one man behind one ox could till in a day. There are also expressions such as ‘strong as an ox’ and flower names like the ox-eyed daisy.

Today oxen are still used in many parts of the world. They do not compress the soil like tractors and leave a light footprint on the earth. Fed a natural diet the ox produces little methane and their use does not require petrol or other agents of climate change. Oxen work with nature rather than against her.

In England one of the few places that still drives oxen is Bhaktivedanta Manor, the Hare Krishna Hindu temple near Watford. There pairs of magnificent one-ton animals harrow and plough the fields, ridge potatoes, shift manure and mill barley and field beans under the supervision of a human driver.

Human and ox made a good partnership and wherever there is a working ox there are jobs for people.

At present the Ahimsa Dairy has six young bulls and we are learning the skills of ox-driving from our friends at the Manor. An ox is not fully grown until he is seven, but they are ready to work at three. Work stops them from getting bored and we plan for our youngsters to be productively involved in our agricultural endeavours on our land in Leicester.

At the moment they are being trained to obey simple commands with the use of a halter and lead. Eventually they will be yoked together in pairs and to work they will go.

One can’t help but think that the depression experienced by many British farmers today arises out of the loneliness brought about by working with the tractor and the loss of the relationship with the ox.