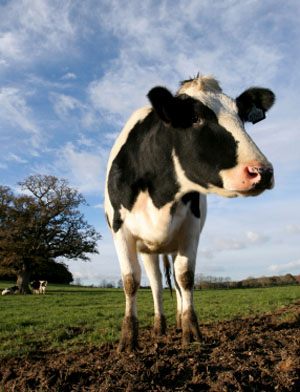 Why culling is not the answer – Posted in: Uncategorized

The Ahimsa Dairy knows only too well the anxiety of waiting for results after our cattle have been tested for Bovine TB. Last year we were biting our finger nails to the bone after the vet came to our Welsh sanctuary to test the herd. The outcome would have been unthinkable had any of them tested positive. We are committed to a no slaughter policy and all of our animals are allowed to live out the whole of their lives until they pass away naturally. We would have been simply distraught.

Thankfully, everyone was clear, but we are still faced with further testing down the line. In short we think the Government’s present policy on Bovine TB is flawed. It’s just all about culling – either cows or poor old badgers and we don’t think the it works. We believe alternatives must be sought.

Even Defra has described the diagnostic test as ‘imperfect’ (Dealing with Bovine TB in your herd, May 2008,p13) and we think it condemns large numbers of healthy animals to death. To some extent we support vaccination, but our solution for cattle is also to identify, isolate and treat individual animals.

The RSPCA point out that after 10 years work the Independent Scientific Group concluded in 2007 that ‘badger culling can make no meaningful contribution to cattle TB control in Britain.’ So what is to be achieved by destroying what are likely to be perfectly healthy animals when alternatives have not been properly explored?

The current policy is just seeking a quick fix for what is undoubtedly a very distressing situation, but scapegoating badgers is unlikely to take us any further towards solving the problem. And that might start with the Bovine TB tests themselves.

This government has a lot to be ashamed about but this badger cull is a crime against nature.