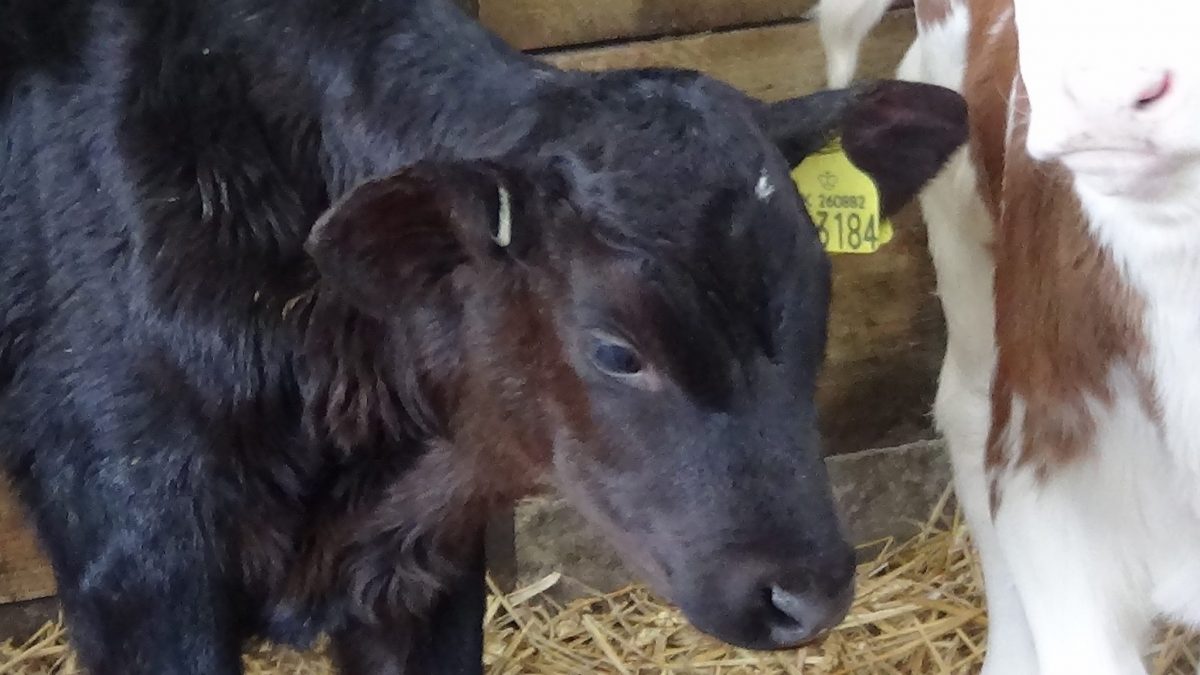 A happy 2013 to all our supporters and friends – Posted in: Uncategorized

So we are already three weeks into the New Year. In the UK everyone is back at work and struggling with colds, commuting and of course the seasonally snowy weather.

The Ahimsa herd are tucked up in their respective barns in Kent and Wales, where our sanctuary for retired cows and bull calves is. They had a bit of fresh air when the sun came out (does anyone remember what it looks like?), but are generally inside for the winter munching on silage (pickled grass) and hay.

Although our cattle all have thick coats, the wind can be pretty mean and the rain makes everyone miserable too (not just the humans) so it is best that they are inside in the warmth. The chief reason though for them coming in in the winter is to save the grass. Too many hooves ploughing it up in the wet could destroy it and nothing would grow in the spring.

So, last year was a bit of a roller-coaster for us. We retired Draupadi and Daisy, two of our milking cows to Wales, and two new calves Horatio and Seymour were born. Horatio is now down in Wales and is being looked after by Daisy.

Last year we also took our milk deliveries in-house, which made our deliveries far more reliable. The Foundation also has a fabulous team of volunteers, who do a tremendous amount to support us. Last year they took part in a sponsored walk, cycle, run around eight London Bridges and helped raise enough for us to buy our first delivery van.
During the year it was also heart-warming that many people came forward to sponsor our cows and young bulls and also took the time to send us messages of support. Our slaughter-free journey has not always been easy, but these good wishes have really encouraged us.

2012 also saw the launch of our soft-cheese. We hope this year to become more established with that as well as developing a hard cheese and other milk products. While we can see the big picture, the steps to get there can be challenging, especially as we have so few paid staff.

We are very reliant on goodwill, for which we are eternally grateful, and our friends who share our vision of a slaughter-free dairy future where no cow or bull calf is ever killed for profit. All of our cattle will live out the entirety of their lives before they pass away naturally.

Finally, there is a great furore in Britain at present after horsemeat was discovered in some supermarket burgers. People are horrified and there is certainly the issue of knowing exactly what you are buying. However, we do not see cow or bull meat as being any more acceptable than horse.

All of our cows and bulls are sentient beings with their own individual personalities and likes and dislikes. Sometimes they can be kind, sometimes they can be naughty (especially Primrose who likes to head-but those who don’t let here have her own way!) and they can be very affectionate.

Regarding these animals as food for the table is just plain wrong. A cow gives us many things and is worth far more alive than dead. As for bulls, it is potty that in Britain far more are not used to work the land. Doing so would provide employment for people and stop the use of fossil fuels, which are doing so much to harm the environment.
The methane argument is spurious as cows and bulls living as nature intended, on natural diets and in natural environments, produce negligible amounts of methane. However, crammed into sheds where they are never allowed to graze in the fields and fed junk, they are blamed for something of which they are only tragic victims.

Let’s hope 2013 sees the Ahimsa milk revolution becoming a force to be reckoned with in the dairy industry and in the minds of consumers.

lovely! bless you all! the cows do! xxxx

You are wonderful people doing wonderful work! I only wish you delivered everywhere, so I could enjoy cows milk again.