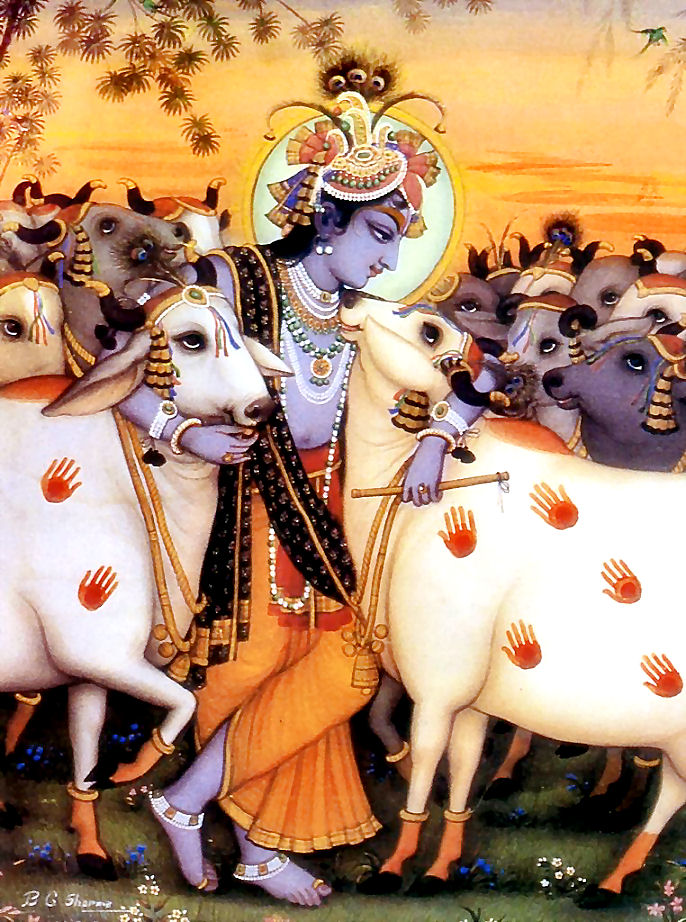 Of all creatures, the cow is given a special place in Hindu Indian religious tradition: ‘I speak to those who are aware: do not harm the cow, for in so doing, you are harming the earth and the whole of humanity.’ Rig Veda 8.101.15

Despite the veneration bestowed on the cow, there is no formal worship of a ‘cow-goddess’ in Hindu temples. Rather the cow is respected in her own right as one of humankind’s seven mothers as she offers her milk as does one’s natural mother. Gandhi himself had the highest regard for cows: ‘To me, the cow is the embodiment of the whole infra-human world; she enables the believer to grasp his unity with all that lives…to protect her is to protect all the creatures of God’s creation.’

Traditionally, the cow is considered dear to the Hindu God Krishna. Indeed, Krishna is often known as ‘Gopal’ – sustainer of cows or ‘Govinda’ – protector of cows, names which refer to his loving feeling for cows. The very names of Krishna’s holy land of Braj (‘pasture’) and his spiritual abode Goloka (‘cow-world’), reveal his intimate connection with bovine creatures . Krishna’s love for the cow is celebrated throughout the Vedic literature. It is no wonder that we find in the Vedas, a great emphasis on ahimsa, or harmlessness to all sentient beings, and especially on cow protection.

(Extract from ‘The Hidden Glory of India’ – Steven Rosen)

Gopastami
Gopashtami is a celebration of Braj culture. Krishna was named “Govinda” after he protected the cows and the villagers of Braj from a deluge of rain by holding Mount Govardhan on his little finger for seven days. On the eight day Indra – a proud and arrogant demigod, abandoned his ego and apologised to Lord Krishna. After that, he was named Govinda and this day is celebrated as Gopashtami every year.
Gopastami is also that day when Krishna came of age to take out cows to pasture, whereas previously when younger, he was only responsible for looking after calves.