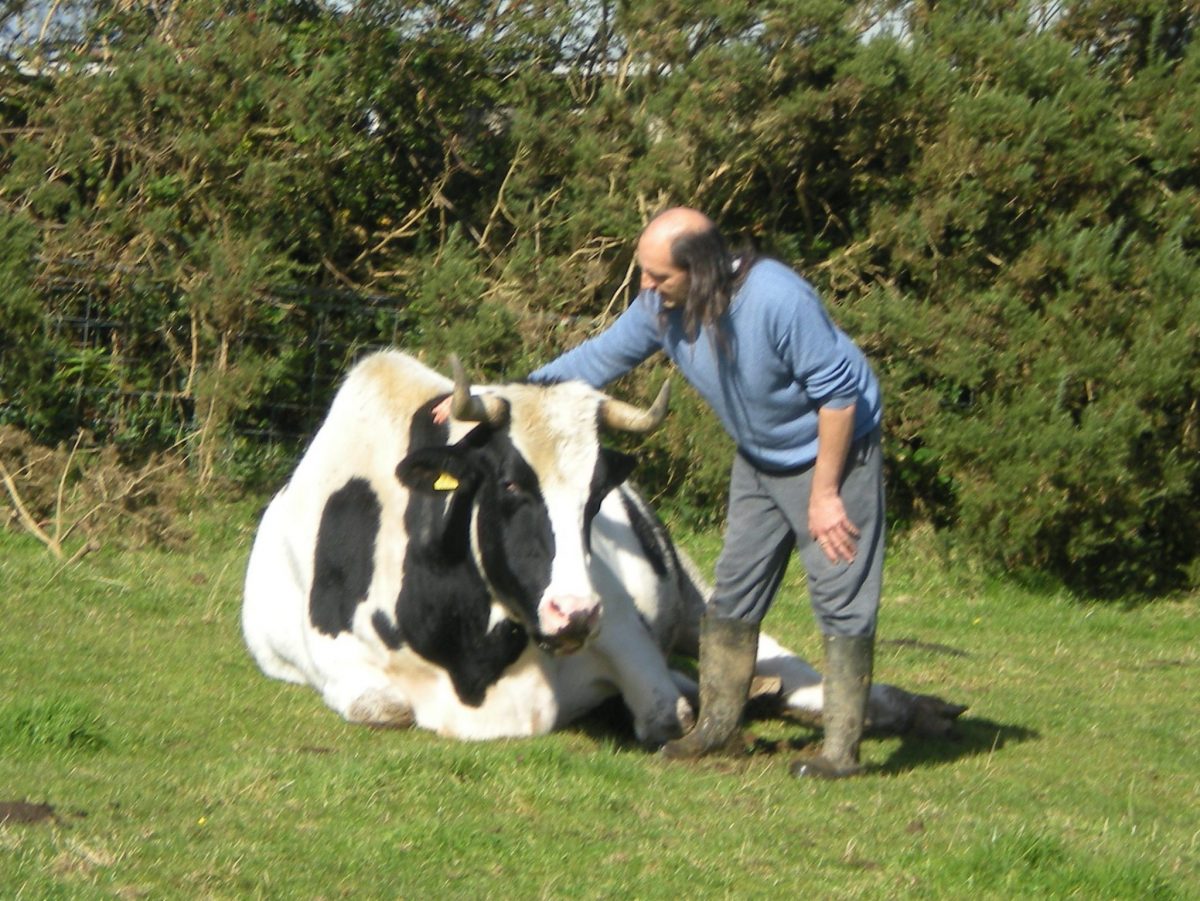 A sanctuary in the Welsh Hills – Posted in: Uncategorized

The Ahimsa Dairy’s Welsh sanctuary is a truly magical place. It is close to the sea and lies in rolling, green hills and has a lake full of water-lilies.

It is here that all of our retired cows go when their milking days are over and where they will spend the rest of their years chewing the cud and relaxing in the fields.
At the sanctuary the cows join our young bulls, who have been brought here from Commonwork, the organic farm we work in partnership with in Kent.

None of our male calves will ever face slaughter and instead we are planning to train them as working oxen. Even before the horse, oxen were the main traction animal in Britain for hundreds of years. There are many jobs, especially on small-holdings, for which they are better suited than tractors. There is also the advantage of them not using fossil fuels or getting stuck in the mud.

At present we have one retired cow, Draupadi, who likes looking after the youngsters. And she has her hooves full with four young bulls and a heifer. Soon she will be joined by another of our older cows, which will give her a peer to have girly chats with, as the only other adults in her field are two magnificent oxen. They are softies, but it’s nice to have some female company.

In another field we have Primrose and Horatio, who are partners in crime. Primrose was bred from a beef bull and it was felt that she wouldn’t be a very good milk cow. As she is so close to Horatio they came to Wales together. In time she might give us some boy calves who can be trained as working oxen.
Every morning the pair both go and moo outside the window of the herdsman who cares for them and demand their breakfast of sugar beet and barley. Some alarm call!

The chief herdsman is called Grahame and much of the magic of the sanctuary stems from him. He is like a perfect mother knowing what the cattle are going to do even before they have thought of it themselves and anticipating their every move. He is very gentle and the cows and young bulls all know that. However, should a bit of naughtiness break out among the youngsters all he has to do is clap his hands and they behave.
When I did that I just got a look that said ‘who is this idiot’.