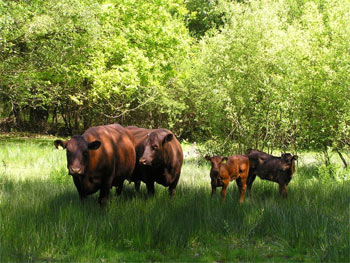 There are over 1.3 million acres of common land in England and Wales comprising of over 9,000 separate units covering all types of landscape and habitat.

Common land is unique in that it is historical land which has remained largely undisturbed through the centuries, a remnant of medieval times when people relied on commons for their survival. It is land where the owners of nearby properties have rights to graze animals, collect wood and bracken or dig peat for example. Those rights still exist, although are not exercised as they were in the past.

As traditional methods of conserving common land have ceased, heath land plants gradually fail under the shade of encroaching trees and habitats are often lost. So, to conserve rare habitats, some trees are felled and areas with heather plants are restored.

A number of initiatives to reintroduce cattle on common are taking place in Hertfordshire, particularly in places where a mixture of heath, bogs and acid grassland sit on infertile boulder clay such as Bricket Wood common. In such areas, grazing cattle help manage open areas more sustainably.

In East Sussex, whilst supporting existing conservation efforts by organisations and owners on designated nature conservation sites for their special habitats and species, the West Weald Landscape Partnership focuses on four core forest areas to deliver enhancements for additional Biodiversity Action Plan species, expand the area of natural habitats around them and encourage sympathetic management of neighbouring land.

This broader progressive approach beyond a traditional site conservation focus allows space for a range of management regimes, from intensive use by people such as woodland coppicing to a greater influence of natural processes including naturalistic grazing by large herbivores such as ‘wilder’ breeds of cattle.