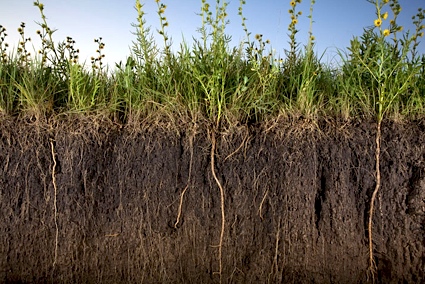 In organic farming, particular types of grasses or legumes, or cow manure are used to fix nitrogen back into soil. Since the 1950s, much of modern farming has become dependent on artificial industrially manufactured fertilisers (not used in organic systems) to add nitrogen back into the soil. According to the 2011 European Nitrogen Assessment, which reported a study by 200 scientists investigating the unprecedented changes humans have made to the global nitrogen cycle over the last century, too much nitrogen harms both environment and the economy.

Nitrogen applied in the form of manure fosters favourable soil microbes, which are indicative of healthy, fertile soil. Manufactured fertilisers infuse the soil with more nitrogen than the plants can use and the excess is washed into rivers and streams. Because cow manure contains organic matter not included in chemical fertilisers, it contributes to improving the soil’s structure and water-retaining capacity. Manure also has the ability to improve declining organic soil structure and components, according to the University of Minnesota Extension.