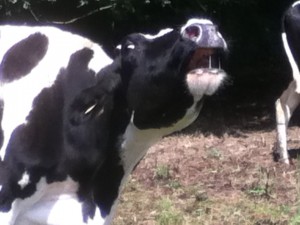 "Please stop killing us for meat, before it's too late."

In a recent National Geographic article, Charles Mann announced:   “Soil degradation is putting the future of the global population at risk.”

Civil unrest in Latin America, Asia and Africa have now been attributed to a lack of food and/or affordable food, as a result of poor soil.

In other countries such as Australia, and the nations of Africa on the southern edge of the Sahara, cattle grazing and feed-crop production on marginal lands; contribute substancially to desertification. Basically we’re adding chemicals to soil to mass produce feed for meat animals, and systematically killing the soil for future generations.

“Overgrazing and the intensive production of feed grain for cattle, and other meat animals results in high levels of soil erosion” according to Alan B. Durning of the World Watch Institute 1986.

So I’ve just said it, Alan Durning was saying it in 1986 and many other people have warned us since. Why does it feel that no one is listening? Perhaps we’re not speaking loud enough. Perhaps we’re being drowned out by the noise of the latest “must have” electronic gizmo or advertisements for “stuff” and recipes that more often than not, include meat to stuff ourselves with.

Right now the ads are everywhere for Turkey orders for the upcoming xmas holidays. These poor birds, days numbered are painfully hobbling about packed, often filthy holding cells. They limp on broken legs, because they’ve been bred to be plump and “juicy” and their spindly legs simply cannot support the weight needed for the dinner table. The grain they’re fed cripples not only these sad birds, but the future of our planet.

By 2030, the Earth’s population will reach 8.3 billion. But in what will we be growing food?

Over the past few centuries, mainly due to meat production, the USA has lost about 2/3 of it’s topsoil. And they consider themselves a super power? What of the rest of the world?

I wonder how many people would enjoy tucking into their Sunday roast beef quite as much, if a tag came with it announcing:

“One pound of beef from cattle raised on feedlots, represents the loss of 35lbs worth of topsoil. But hey, it’s traditional right, don’t worry about it. Enjoy!”