If you’re getting married at the local registry, you might ask your best friend to come and be a witness. Or maybe your Mum and Dad. Or your cousin’s sister’s wife – if you’re really desperate! But  – a cow?

The Ahimsa team attended a traditional Indian wedding a couple days ago. It was a joyous, colourful affair. Hymns were sung. There was a small fire in the middle of the room into which grains were thrown. The bride and groom were dressed up in full Bollywood bling, and there were tears aplenty. We were surprised to hear in the final wedding vows the mention that a cow should be present as a sacred witness to the couple’s union. The wedding venue was a Grade II listed building, so they didn’t bring in a heifer from the local farm, but there was a small, copper sculpture of a cow to represent its presence. 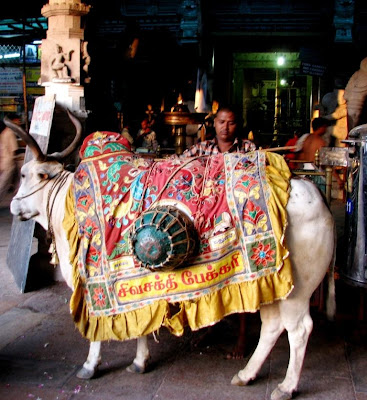 Most people know that cows are revered in India, and that they are regarded as a mother because of the life giving milk they give, but they are also an integral part of religious functions, and considered to bring good fortune wherever they are present. Just as in the blog about the Alpine cow parades where cows are decorated with flowers and bells, in India many festivals involve decorating cows with fresh flower garlands, painting them with natural colourful dyes and attaching bells to their feet. Being fed well and pampered in between, they are brought into the temple compound to witness ceremonies and bring auspiciousness. Some even believe that if you happen to get hit by a swinging cow’s tail, especially on the head, it’s doubly auspicious.

So next time you want to bring an extra special guest to your wedding, why not consider a little cow…you might not want a tail on your head on your special day, but you never know…it could just be the secret to a long, happy marriage!