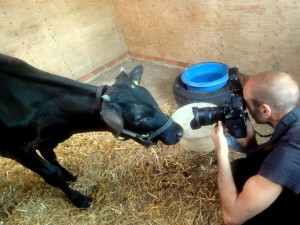 Seymour is a bull who was born on 13th December 2012. He is Tilly’s son and it virtually all black apart from a little white tuft on his head and on his underbelly. He is very shy, but also very handsome.

Once Seymour had been weaned off milk at about 3 months, he went through a difficult period when he got ringworm. Dermatophytosis or ringworm is a clinical condition caused by fungal infection of the skin, leaving lesions all over the body. The term “ringworm” is a misnomer, since the condition is caused by fungi of several different species and not by parasitic worms.

After several months of infection, he recovered and in July 2013, he went from the Commonwork farm – where he was born – to Spitalfields City Farm in East London. 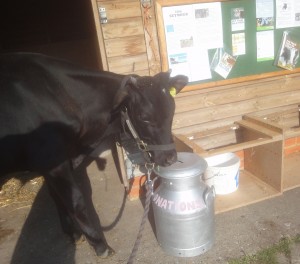 Home to sheep, goats, donkeys, pigs, poultry and small animals, Spitalfields City Farm is one of two London city farms that have adopted a non-slaughter policy and aspires to be an educational resource which can teach respect for animal life and explain where food comes from without breeding animals for consumption.

In March 2013 “CowFest” was launched, a fundraising event to help raise funds to bring cows back to Spitalfields.  It was here that Spitalfields farm formed a partnership with the Ahimsa Dairy Foundation and a collaboration began.

Seymour was an instant hit with visitors, schools and corporate groups alike and has enabled the farm to raise awareness of the welfare concerns within the dairy industry as well as helping to promote Ahimsa as an ethical milk choice

“I had no idea mega-dairies existed, cows should see grass and sunshine not be kept in factory farms!” SCF Volunteer

For many children a cow is the first animal they expect to see at a farm and with Seymour’s arrival the farm immediately feels more complete. 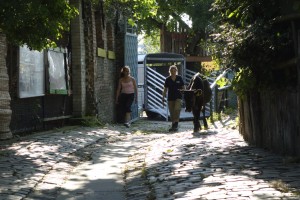 School groups enjoy the opportunity to closely observe Seymour and comment on his shiny coat, the way he likes to stand in the shade and how he uses his tail to flick off flies.

For teachers bringing their pupils to the farm, Seymour is a valuable asset to support learning in all areas of the curriculum from literacy, to art, to science topics. Having a cow at the farm invites discussions with children about where food comes from and helps children make the connection between the food they eat and the world around them.

Seymour is curious boy and adores company from any species; people pass by to say a quick hello but often end up for quite a time giving him a chin scratch!

Many visitors have commented on how well Seymour looks. Farmyard co-ordinator, Jenny Bettenson, admits “he is quite spoilt here; we try to achieve organic animal welfare standards so it has been an interesting experience for staff and volunteers to learn about cattle care.” Flies are a nuisance for many cattle and can cause health problems if not kept under control – Seymour has had the luxury of garlic granules in his feed, Neem oil rubbed on target areas and mint chandeliers hung in his stable to help deter the flies and keep him as comfortable as possible.

One of the lovely aspects of this partnership is telling people of Seymour’s journey to come. Male calves in conventional dairy farms are often killed or raised for meat but the Ahimsa Dairy Foundation are exploring innovative ways of working with bulls and it is hoped that when he is fully grown Seymour can be trained as a working oxen.  Part of this training has already begun at Spitalfields as Seymour is walked on a head-collar and lead from the stable to his exercise paddock each day. “We have used positive-reward based training to build a bond with Seymour.” says Jenny, “He’s such a character – a slow thinker so you need to give him time to process a situation but he loves his food so this has helped us teach him to target objects and overcome fears of cattle handling equipment.”

Seymour will be missed when he returns to the Ahimsa’s cow sanctuary but we look forward to following his lifelong progress and continuing to welcome more foster cows in the future.