On pleasing the cows

Home / Uncategorized / On pleasing the cows

On pleasing the cows

In most dairies cows rarely get treats. Farmers believe giving them anything beyond a routine diet eats into profits and wastes vegetables that could be sold at market. So the team at Ahimsa are often regarded rather oddly when we attempt to please our cows with tasty titbits. 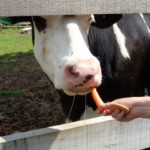 It is true, sometimes we are a little indulgent as we clear Waitrose shelves of organic carrots grown by Prince Charles, but actually it gives us as much pleasure as it does the cows and young oxen.

Sometimes though ennui sets it and they turn their noses up at boring carrots. They want parsnips, or bananas or even chopped up apples and the occasional rich-tea biscuit has been a favourite for most of them since they were little.

But most of our milking cows were not used to such delicacies having come from the large organic dairy we have been working with, nor were they used to being fed by hand.

Once they came to our Groby farm some took their time to take advantage of what was on offer, whilst others got the idea really quickly. Rosie for example thought all of her birthdays had come at once and would eat anything. She once managed to steal a whole bag on parsnips and carrots while we were feeding the other cows. One little parsnip covered in slobber was left was when caught her.

Champa on the other hand wasn’t in the least interested in snacks and would head-but us when we tried giving her something. She came to be known as Mrs Grumpy – as opposed to Rosie who is Mrs Greedy -. Then one day she had an epiphany and realised she was missing out on good things that all the others were getting. Her nature changed, she became sweet and pleasant and covered our hands with cow slobber as she gobbled up what ever she was offered.

There is still a very strict pecking order though and apart from Harry and Henry, who are both greedy and naughty, every cows or ox waits their turn whilst the older ones dig in first.

Draupadi and the ever present Rosie are normally first in line together with Horatio. In fact Draupadi generally lets Horatio do the initial tasting before she has anything – just to ensure it is palatable. Dharma always has a sniff, but unusually for an ox he can’t be enticed with food, which is a bit of a nuisance when we are trying to work him.
A certain amount of pushing and shoving then ensues, with Nimai and Nitai getting in on the act and then Padma, ever graceful follows up behind. Primrose, who is a bit of a princess, has to be fed separately and as for poor-old Seymour, he is so polite he doesn’t get a look in and we have to keep stuff in reserve for him. His mum Tilly also lets grass grow under her feet and doesn’t like the rough and tumble of competing with the others, so we have to save nibbles for her too.

All in all treats keep our cows happy and feeding them is a treat for us too.