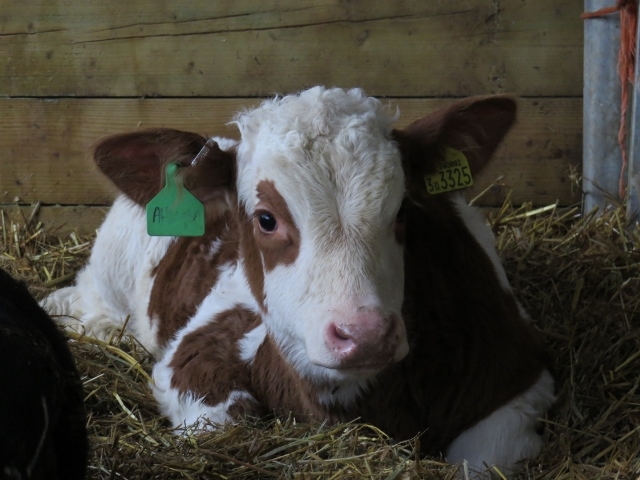 In part 1 we flagged the terrible plight of UK dairy bull calves.  Around 20 per cent are euthanized at birth. Although numbers fluctuate from year to year that is nearly 100,000 appalling deaths. At the Ahimsa Dairy we think this is a crime against nature and we are fighting back. As Gandhi, the great Indian leader said: “Be the change you want to see in the world.”

At the Ahimsa Dairy we have always kept our bull calves. We raise them to be strong and magnificent oxen, who will work our land with plough and harrow as their brothers did for centuries before the advent of the heavy horse and then the tractor. They use no fossil fuels and work in harmony with their ox-driver and with nature etching the land with ridges and furrows as the farming year dictates. As with all young men, meaningful work stops them from being bored and it keeps them fit. We want to train more farmers to reclaim these forgotten skills and celebrate once again this perfect union between humans and animals.

Dunstan, now five, will be fully grown in another two years 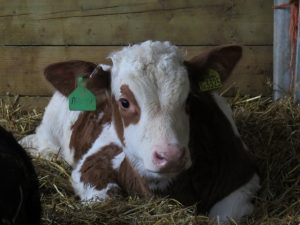 But we also told you about the misery of breeding bulls and artificial insemination – a clinical arrangement whereby a bull is milked for semen and never sees a real cow. He is teased to ejaculate into a false vagina and that is all of the action he will get to experience.

At the Ahimsa Dairy we are now preparing for the arrival of Superhero, our Swiss Brown bull. We have used a bull before when we were in partnership with another farm, but for the first time we will have one of our own and it is a very big deal. Our chap is only two and will not be fully grown for another five years, by which time he could weigh up to one-and-a-half tons. Unlike oxen, bulls can also be a bit grumpy, especially if they are in a romantic mood and are thwarted in their endeavours, so we have to ensure Superhero’s field of love is secure.

The bill for erecting bull-proof fences is high, but we have now engaged a contractor to take on the challenge. An amorous bull is quite capable of jumping great heights to reach the object of his devotions and we don’t want any unplanned additions to the family.

The ladies have now all been told that Superhero is on the way and is a suitable match. Let’s hope he meets their expectations and they are not too rough on him. Cows can be very fussy. Watch this space for news of the first encounter.