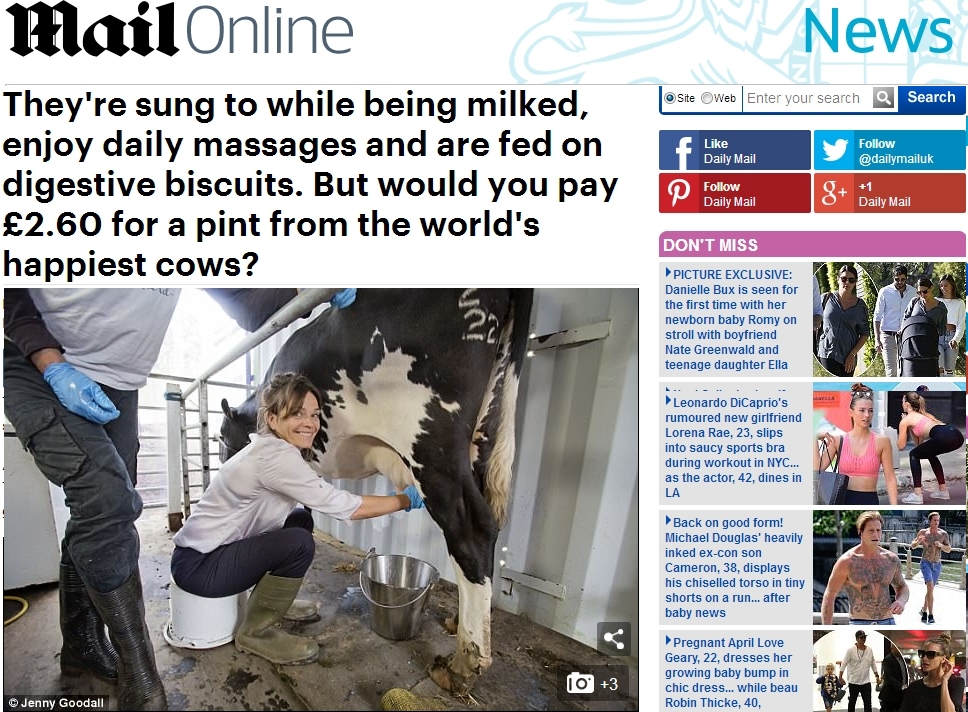 They’re sung to while being milked, enjoy daily massages and are fed on digestive biscuits. But would you pay £2.60 for a pint from the world’s happiest cows?

By Jane Fryer for the Daily Mail

Their meaty flanks gleam. Their eyes shine. Their pink udders glow as their tails swish and sway. They are calm, zen-like, almost, as they wallow in bovine bliss.

And so they should be. For these are Ahimsa cows — the luckiest cows in the world. They live on 48 acres of cow heaven, eating only the tenderest, tastiest organic grass available — plus the odd organic carrot or digestive biscuit as a treat. 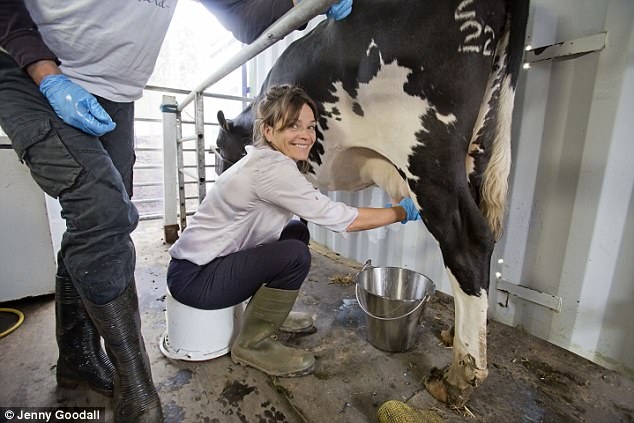 They are fussed over, sung to, stroked, groomed, massaged, respected and revered. They have names such as Buttercup, Violet, Jasmine, Rosie and Cowslip and, however old they get, will never, ever, find themselves looking a steel bolt or electric stun gun in the eye.

Their extraordinary good fortune is all thanks to Nicola Pazdzierska, 57, and Sanjay Tanna, 52, who set up the not-for-profit Ahimsa Dairy Foundation (Ahimsa means ‘cruelty-free’ in Sanskrit) in 2011 after spending time at Bhaktivedanta Manor (the vast stately pile in Kent given by Beatle George Harrison to the Hare Krishna movement in 1973).

‘They were our inspiration, seeing how beautifully they looked after their cows,’ says Nicola.

So, in 2007, with six cows from Bhaktivedanta, Nicola and Sanjay started their own cow welfare programme. Ever since, they have dedicated their lives to ensuring that this family of 11 dairy cows, four retired milkers and an assortment of bulls and calves enjoy a long life of unparalleled luxury. Along the way — and only if they fancy it — the cows produce some of the thickest and creamiest ‘raw’ (unpasteurised) milk in Britain.

At £4.50 a litre, it is also surely the most expensive. It’s nine times the cost of Sainsbury’s bog-standard milk. That’s £2.60 a pint, for goodness’ sake.

But according to Nicola and Sanjay — and, presumably also the hundreds of loyal customers on their waiting list for the 60 or so litres Buttercup and co produce each day — it’s worth it.

‘Of course our milk is expensive. We charge a lot for it, but that enables our cows to live long and happy lives,’ says Nicola. ‘It is beautiful. It is golden. It is the best. It is full of goodness. It is very labour-intensive.’

Indeed. Every evening, the animals are hand-milked by one of three cowherds, each of whom will lean a forehead on their warm flank, and sing softly or chant mantras as they tug gently with their muscular forearms.

‘There is none of that nasty ‘bish bash bosh’ of the milking machine three times a day,’ says Nicola.

‘The cow is the hardest working animal on the farm and we wanted to celebrate, love and respect them. Say thank you and give them their natural rights,’ adds Sanjay. 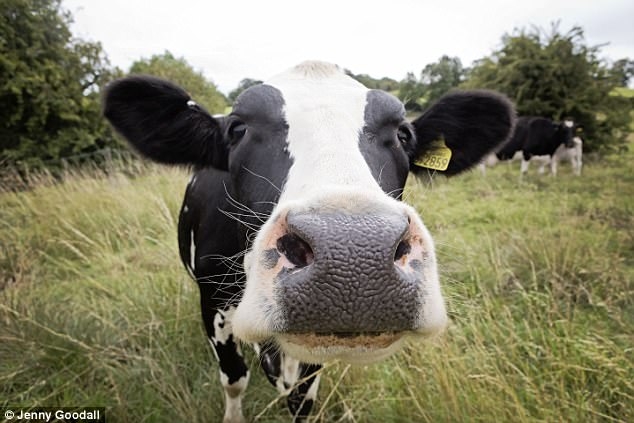 Moo: They live on 48 acres of cow heaven, eating only the tenderest, tastiest organic grass available — plus the odd organic carrot or digestive biscuit as a treat

There are no cramped indoor stalls with barely enough space to turn round and no genetically modified foodstuffs shipped in from South America. Instead, the cows potter round pastures and barns as they please, snack on hay, silage and organic pellets, are bred only when they look ready — and are never artificially inseminated, as happens to most cows in Britain.

‘Here, we send them off for a nice play with a bull,’ says Sanjay.

Indeed, the very mention of artificial insemination makes Nicola blanch. ‘It’s bad enough for the cows, but a bull is a magnificent creature,’ she says. ‘To be locked in stalls and milked for semen . . .’

They even let the cows wean their offspring for a full six months. (The average for commercial farms is four days).

It is an idyllic set-up — peaceful, ageless and rural; with gently-lowing, cud-chewing, tail-swooshing animals straight from Thomas Hardy (if you ignore the plastic tags bobbing in their ears).

But the overheads are high. The land alone cost £365,000. Somehow, thanks to Ahimsa ‘membership’ fees, donations, celebrity endorsements — pop veterans and animal-lovers Chrissie Hynde and Brian May are both great fans — and a bank loan, Nicola and Sanjay cobbled together the money and moved the cows in at the end of April.

This doesn’t include the times when the cows’ milk dries up, their fertility wanes or they get ill. There’s no question of turning them into burgers, as most cows are after five or six years. ‘We hope they’ll live to 18 or 20,’ says Sanjay. 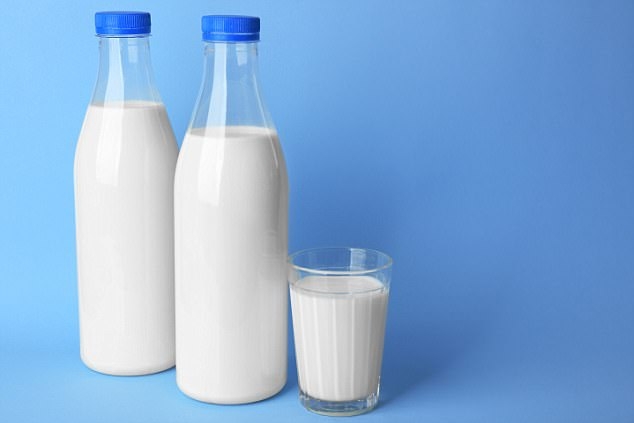 It’s hard to see how 60 litres of milk a day, however expensive, is going to pay the bills

All the while, they’ll be treated with natural remedies. Only in extremis are antibiotics used.

‘We would nurse them as you would a sick relative or a parent. To the death,’ says Nicola.

But what if they’re in pain — would you put them out of their misery? I ask. ‘Only in the most extreme circumstances,’ says Sanjay in hushed tones.

He tells of one cow which, last year, had a brain haemorrhage and was given three days to live by the vet but, since being relocated to a sanctuary in East Sussex, has made a full recovery.

‘We go the whole hog here,’ Nicola explains. ‘We’re hoping to open a cow hospital soon. This is a commitment for life. And not just to these cows, but their calves. And their calves’ calves.’

When cows do finally go to the great pasture in the sky, the full team gather for a memorial service — prayers, and maybe some chanting, to celebrate their life.

‘It’s a terrible thing when they pass on, just terrible’, says Nicola.

As a teenager growing up on the outskirts of Sheffield, Nicola worked on a farm, but then moved to London and spent years working as communications executive in the public sector.

Her epiphany came when she visited Bhaktivedanta Manor.

‘I was milking by hand, I was driving the oxen. I was drawn to cows.’

Today, she lives and breathes them. There are pictures of the herd all over her house, she has just finished writing a book about them and, when she’s on holiday, she misses them so much the cowherds send her photos.

The feeling is clearly mutual. As we wander through fields, they follow her, nuzzling and nudging her with their enormous heads and edging close with their bodies.

‘People think I’m obsessed by cows and I am, totally!’ she says, cheerily. ‘The more you get to know them and appreciate their foibles and personalities, the stronger the passion becomes.’ Which is a good thing, because caring for this herd is hard work.

Nicola and Sanjay spend their lives travelling up and down the motorway from home in Watford to Rutland. They work through the night at weekends to bottle milk in a lorry trailer converted into a mobile processing plant. It’s sold in North London farmers’ markets and by mail order.

And this is just the beginning, for they have grand plans. As well as the hospital, they’re developing a raw gouda cheese and planning an ‘interactive’ visitor centre.

They hope to put the bulls to work pulling carts, ploughing fields and grinding flour.

‘The girls pull their weight, but at the moment the boys do nothing other than fertilise the pasture,’ explains Sanjay — who hopes to develop a farming model that others can copy. ‘We are part of a movement towards slaughter-free farming,’ he adds.

Critics say this is utterly unfeasible — it would require at least four times as many cows to match the 1.2 billion litres of milk produced each month in the UK.

This would increase methane levels dangerously — cows are notorious for gas production — contributing to global warming.

But Nicola has little truck with such naysayers. ‘I’ve never been convinced by the methane argument,’ she says. ‘And we’d rather people drank less milk, but better milk — that hasn’t been treated until there’s nothing left.’

Their most audacious plan, however, is to go electricity-free and generate power by harnessing the energy in cow dung.

The passion and commitment of the duo is extraordinary and this is a glorious Utopian scene, tinged with sadness for the millions of cows missing out. While they are constantly being offered rescue animals, they have strict criteria. Not least that all their cows have to have been sired by a bull, not by artificial insemination.

By now, it’s milking time. I chat to John, one of the cowherds, who comes from Oldham. He was a lab technician until he discovered the Hare Krishna organisation. Aged 47, he looks 20 years younger.

‘I love being with the cows,’ he says. ‘If you’re feeling low, they make you feel better. They’re clever; they learn quickly and they know their names. If I call one for milking, she’ll come trotting in.’

After he’s tenderly sponged Buttercup’s udders, cooed in her ear and given her a bucket of nuggets, he teaches me to milk her.

It is wonderfully grounding. A cow, a stool, a metal bucket, four rubbery pink teats and a warm black flank to lean my head on.

‘They sometimes withhold if they don’t like you,’ he warns.

But Buttercup is feeling generous. The milk froths hotly into the bucket as I tug gently and breathe in the farmyard smell.

Afterwards, when it has been chilled (but not pasteurised) and I’ve got over my surprise at how golden and shimmery and thick with cream it is, I try some and am immediately transported back to the summer pasture.

I can taste the lush, green grass, the sweet buttercups, the soft clover. In fact, you can almost taste the cows’ sun-drenched happiness.